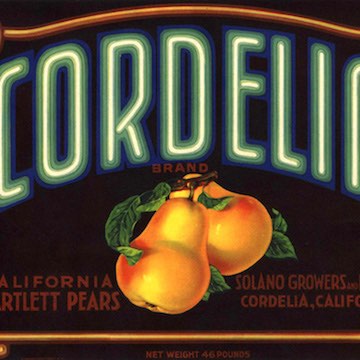 While the discovery of gold in California is being celebrated throughout the state during the sesquicentennial, the majority of people who came to California did not find wealth in the Gold Rush but rather in agriculture. 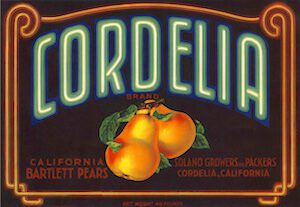 In the upcoming exhibit at the Vacaville Museum – Solano’s Gold, The People and Their Orchards – the rich soils, ideal climate and pioneering spirit of the ranching families of this county will be highlighted as vital components of the past and present riches of the area. Using the words and images of local people who remember or still participate in this way of life, the exhibit will document the rich agricultural tradition of the Solano orchard industry.

The exhibit, which opens on International Agriculture Day, March 20, and is the result of a three-year project involving extensive archival research, oral history interviews and photographic documentation.

The following is an excerpt from an interview with Kirby Allen Stevens, one of the subjects contacted for this project.

“In about 1925, when I was 9, 10 years old, I moved from Virginia to Fairfield with my mother and a sister. My father had passed away years before. We came out here because my sister and her husband were here. I was enrolled in school, a three-story grammar school in Fairfield.

“Very shortly after we arrived, my mother passed away, and I moved in with my sister and brother-in-law. A couple of years later, say 1928, I went out on my own. Just before I started high school, when I was 12 1/2, 13, I went out on my own and found work baling hay, punching wires on the hay press. You’d sleep on a stack of hay at night and bale hay all day. A dollar a day was my pay and they furnished your three meals. I started out over by Cordelia and then I moved out towards Grizzly Island. That was all hay out there where Sen. (Benjamin F.) Rush had a ranch. I baled hay on his property.

“When I was working on the hay baler, it was damn hot and that chaff would get down your back that I made up my mind that someday I was going to earn my living with my coat on. I wasn’t going to be working out there sweating. The only way you can do that is to get an education. So I was going to finish my schooling somehow.

“I enrolled at Armijo High School and got a job at Hunt Bros. cannery. They had about 75 little wooden cabins for the workers and I moved into one of those cabins. The rent was a dollar a week. Naturally, I didn’t have any dollars, so on Saturdays I hauled the garbage from the cannery to the dumps with their model T Ford truck. That’s how I paid my rent.

“The cabin was very small. A two-room wooden building with a kitchen and a living room-bedroom. For cooking, I had a two-burner stovetop. I had lights, an electric heater and there was a toilet. The shower was in another building. 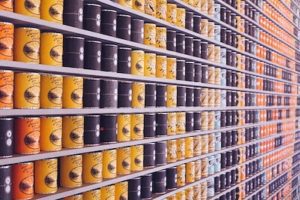 “The cannery’s warehouse was in year-round operation, because they were shipping all the time. The canning itself was seasonal work. In the spring, they canned peaches that came from the Suisun Valley, Vacaville and Winters. The canning lasted about two months. In the fall, it was asparagus from the Alexander Kellogg Ranch on Grizzly Island and a lot of the asparagus also came from over Rio Vista way. Asparagus was again a relatively short season.

“During the seasons they’d probably be about 150 people working there. A lot of workers came from Mexico. Some from the Bay Area. Some from up north, Orland. A 150 was a lot of people when you consider at that time there were only 3,000 people in Suisun, Fairfield and the Valley.

“When the cannery was running peaches, late spring-summer, I didn’t go to school. I worked full time. We’d start in about 7 in the morning and finish for the day normally about 5, 6 o’clock. Then I would work later with the cleanup crew. The asparagus was always at night. It started around 3 in the afternoon. I’d get out of school around 3:30, go to work and work until 10, 11 at night, sometimes until midnight. I wasn’t doing too well with my grades during that time.

“I was made foreman of the Spanish speaking cleanup crew that went through the place when they were finished canning for the day. The rate then was 20 cents an hour and because I had people working for me, I got 25 cents. The only Spanish I knew was what I had in school, so the people in the cleanup crew would help me, primarily with enunciation. They were very helpful to me. I could speak it quite fluently at that time. They were nice people. The other thing I did was oversee a crew that ran the hand trucks to haul the fruit around.

“The cannery kind of closed down between the peaches and asparagus. The cafeteria closed down and the people moved out of the cabins. When the cannery wasn’t running I always had jobs around town. That’s how I got through school. I’d wash windows, pull weeds, do any damn thing. If you needed something done at your house, you wanted somebody to scrub floors, I’d could do that. I traveled to the school and around town on my bicycle. That was S.O.P. (standard operating procedure) at that time.

“One of my jobs was cleaning up the Catholic Church in Suisun. My pay was 10 cents an hour. Right next to the church was a building where they’d play bingo and have lunches and dinners for their groups and I’d get to clean that up. They were always real good to me. After I was finished, the priest would always pay me. This one priest, he’d say, ‘Oh Kirby, would you mind going down and getting me a package of Lucky Strikes?’ And he’d give me a quarter. A pack of cigarettes cost about 13 or 14 cents. I’d come back and he’d always tell me to keep the change. The man probably had five cartons right in his closet. It was just his way of giving me an extra 10 cents.

“That job was important to me, because I’d go in every week. It was regular pay for me. When they had a change of priests, me being Protestant I didn’t know whether I still had a job or not. The new priest called me in to the rectory, ‘Kirby, I know you’re Protestant and, as you know, I’m Catholic. This may not mean much to you, but this is the way I make my living. If you promise not to try to make a Protestant out of me, I won’t try to make a Catholic out of you.’ I often wondered if I’d had been a Catholic boy working at a Protestant church, whether the minister would have been as considerate. Those guys were great to me.

“That’s one of the things that annoys me when I read in the paper about some priest who’s gone sour with some kid. If there was ever a kid that was vulnerable for that sort of thing, I was it. I was 12, 13 years old. No mother. No father. Out on my own. Very dependent on the dimes and nickels that I got. But these guys, every one, were just perfect. Just great.

“I was tickled to death to be working for the church. I liked to eat. It was a matter of livelihood. It meant I could work and still go to school and have a place to sleep on my own.

“In those days, the butcher always had a lot of fat from the animals. He’d give that to me. I could melt that down and never have to buy Crisco or oil. I remember one time I went for a whole week and hadn’t had a thing to eat but potatoes. I ate those damned potatoes fried, boiled, and mashed. During the season, the cannery cafeteria was open. They put out good meals, but I didn’t eat there. I could prepare my own food cheaper than I could buy it already made.

“The end of my high school years, last year or two, I worked over at California Packing Corporation, which is also Del Monte. It was located in big three-story building between Fairfield and Suisun. That’s where they handled the dried fruit. All the ranches had dried fruit, which came in well after the fresh fruit is over. The dried fruit were, apricots, peaches, pears and prunes, which the farmers dried in their fields.

“Bob Smith was the weigh master at CPC and he taught me to grade the fruit. It doesn’t take a lot of brains: This one looks like hell and goes over in this stack. This one looks beautiful, it goes over here.

“When I was out of high school, I got a job at Sheldon Oil in Suisun. Boyd Sheldon had a business delivering burner oil, road oil and heavy burner oils all over. I drove a truck for him. I did that for quite a while. I moved out of that little cannery cabin and rented a room in a house. Eventually I rented an apartment.

“After a while, I went with the railroad switching boxcars. I worked as switchman, engine foreman, brakeman on the freight trains and yardmaster later. I wasn’t wearing a coat, but I wasn’t out in the hot, hot sun.

“Then I went through a session at Stanford School of Business and went into real estate and insurance. Yes, my high school education had helped me in that I could read and write and education teaches you to control things a little bit, too.”