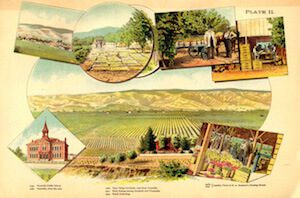 The fruit industry thrived in the Vacaville Township as the area’s major economy between 1875 and 1915. By the turn of the century, half of all California’s deciduous fruit was produced in the Vaca, Pleasants and Lagoon valleys and adjacent hills in Putah Creek and English Hills.

Starting in the late 1890s, the population for the next 50 years stayed at about 1,500 residents. However, every spring and summer, migrant workers moved in for the fruit harvest with at least 5,000 men, women and children finding employment for many months each year in the fields, in the cutting sheds and at the packing houses, preparing and transporting the fruit to market.

During the early years, the labor force was largely Chinese, but after the Chinese Exclusion Act of 1882, this work force declined sharply.

Soon the Japanese moved in and picked up much of the slack, and the Spanish also found their way to Vacaville.

The fruit industry was so profitable, it was said to be the gem of all the resources and industries in Solano County at the turn of the century.

The valleys sheltered by high hills barred the moisture-laden clouds and shut out the hot drying winds.

In this environment the trees began blooming in early February, ensuring fruit would ripen rapidly. Even citrus fruits were marketed a month ahead of Southern California.

By April, the fruit was being shipped to market. The area was renowned for having the first deciduous fruit sold in the United States each year, earning the Vaca Valley the reputation nationwide as “The Early Fruit District.” The sweetened fruit that grew in these sheltered valleys produced an overall product that made the county famous far and wide.

In Solano County, 53,000 acres were labeled as prime fruit land. Another 240,000 was labeled as secondary fruit land, but primary grain land.

In the fruit belt, which also included Green Valley and Suisun Valley, there were more than a million trees, deciduous and citrus, with fruit ripening every month of the year.

In 1904, the following cultivation table was set up, showing the vastness of fruit farming in the area:

The fresh fruit was shipped carefully. There were five big packers in the area, and competition was fierce as packaging was a great concern with the growers.

A pleasing presentation – the appearance and condition of fruit – determined the price obtained back East, and thus the profit margin for the growers.

The fruit was carefully selected and wrapped and packed in boxes just so, with artistic and colorful labels. These boxes were then shipped in ventilated refrigerator cars to the Atlantic seaboard.

Each car could hold 10 tons of fruit. In peak years, 1,800 freight carloads of fruit left the area each season. In 1903, the total shipments of fresh fruit from Vacaville numbered 1,400 carloads.

Great quantities of fruit were also marketed to canneries and as dried fruit. The fact that the growers were not dependent on just one method of marketing their products, but could sell their fruit fresh, dried or canned meant they could realize the highest returns from their products. The fruit sold for millions of dollars each year, making fortunes for the orchardists.

The dried fruit raised on non-irrigated land provided the highest percentage of marketable product, with some varieties losing only half their weight in evaporation.

Dried fruit was cut and spread on great trays that covered acres of land. In Solano County, thousands of tons of fruit were prepared in this manner every year.

The dried fruit was not only shipped throughout the United States, but loaded onto ocean liners that stopped in San Francisco and sent to many foreign ports.

In addition, there were a number of extensive vegetable fields, and that product also was the first in the San Francisco market, thus commanding the highest prices.

Vegetable shipments began in February, midwinter by standard. It was estimated in 1904 that $50,000 a year was received by the local vegetable growers, a profit of $150 an acre being nothing unusual.