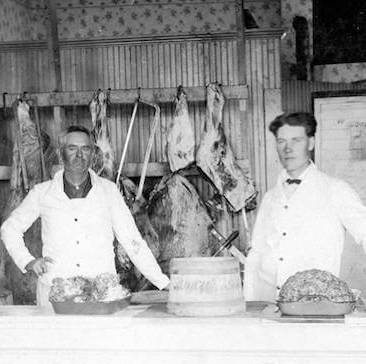 Looking Back on Market Past 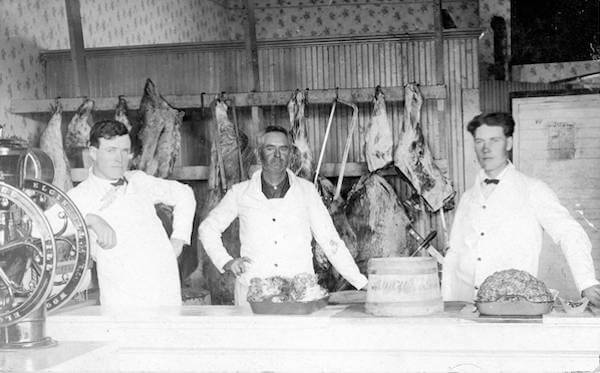 A: Oh no. Never knew about aging. Never had the good facilities to age meat. They would sell meat by the pound in those days. It wasn’t one steak or two steaks. People just bought their meat in chunks. We would lay it on the block and cut it up, starting at the neck. If you came in and bought 20 pounds and we had just started, you get 5 cents a pound of the neck. If you came in later and we were at the rump, you’d get 5 cents a pound of the rump. It was just meat. . . . Everybody just roasted chunks of meat or made stew.

Q: How would you slaughter a sheep?

A: You hit them over a head to knock them out. Pigs you shoot and cows you shoot.

We sold poultry, too, which we sold New York dressed style. You’d butcher them and pick them. We’d leave the feet and head on and the entrails in. Turkeys the same way. You’d wrap the heads up with paper and hang them by the feet. That’s what they called New York dressed. When a customer came in the shop, the butcher would finish cleaning the chicken if that’s what the person wanted. Some people wanted the head, the feet and they even ate the entrails. Some people used to come to the slaughterhouse to get the tripe, the stomach, which they liked to cook up.

Q: What did you do with the hides?

A: They’d all be salted down. We would salt them down and put them on a concrete floor. That would preserve them until the hide buyer came around – once every month or two – and buy the hides and sheep pelts.

All the extra fat on the animals was called tallow. We had to melt it down in a big kettle and then put it in big barrels to sell to the soap factory.

We cooked everything up, all the bones and so forth that were left. We had a big kettle, a big deep one, and we’d put all the entrails and bones in the kettle with water and plain barley on top. We’d put a big lid on top and steam it a long time until it was really cooked up. It was feed for the pigs.

We had two big kettles; one for the tallow and one for feed. They sat on a brick oven over a wood fire. The built up brick oven had an opening on top just wide enough so the kettle wouldn’t fall through.

At the foot of the brick oven there was a door and you’d put the wood in there for your fire, which was directly under the kettle. We raised some animals out on the ranch where the slaughterhouse was. We had a lot of pigs that we’d fatten for slaughter. We bought them small and raised them until they got big. We didn’t butcher a pig until it weighed around 210 pounds.

We also bought cattle to fatten up on the ranch. We’d buy young lambs, too. One week we’d buy 10 lambs and butcher them. Next week we’d buy 10 more to butcher. People in California didn’t like mutton, so we’d take the lambs right from their mothers.

We didn’t sell any wild game. My dad didn’t fool around with wild game. But in 1927, we sold buffalo meat, which was shipped in frozen.

The butcher business was a good business. Everybody bought a lot of meat, because they had big families. For a while my dad was the only butcher around. Then there was one in Suisun, Charlie Kock. People did slaughter their own animals on their ranches, but they could only do in November and December when it got cold because they didn’t have refrigeration.

Refrigeration is the main thing. If you take care of meat right, you never get bacteria in it. You’ve got to keep it cold. When the farmers would butcher in November, December, they’d be able to keep the meat cool during the night. In the morning before the sun came up, the farmer would wrap the meat in blankets to keep it cold. It works on the same principle as a thermos bottle.

Q: How did things change when the inspection rules came on?

A: We had to get more sanitary. We had a concrete floor and a lot of water. The one my dad built in 1930 was a nice building with lots of windows. It was real sanitary. We’d butcher one day a week. All through high school I couldn’t go to school on Thursdays. That’s the day we’d butcher and my dad needed me.

We’d start in at 7 o’clock in the morning with the veterinarian there as the inspector. He would test every animal. Take their temperature and check to make sure they were healthy. We’d start off butchering beef. Then came the lambs. The last thing we’d butcher was the pigs. We’d butcher all day until about 4 in the afternoon.

We’d shoot all the animals. Say, I’m going to kill six hogs. I’d kill a couple at a time. We’d bring them in and put them separate pens. We’d shoot them, bleed them and then wash them all off good. Then we’d scald them to take all the hair off. Finally we’d hang them up and put them in the cooler.

The cooler we had was only an air cooler with big vents on top. This country here is just the thing for it, because we have that west wind that cools everything off. We’d leave the meat stand in the cooler at the slaughterhouse overnight and the next morning we’d bring it into the meat market and put it in the refrigerator there. That was a big icebox with tracks and rollers. The meat market is now Joe’s Restaurant and the old iceboxes are still there. My dad wouldn’t allow any blood on the floors of the iceboxes. You want it clean and sanitary. We had to keep that all mopped up and there were certain areas where we put down sawdust to absorb any moisture.

It was in 1942 when I was 28 years old that my father retired and I took over the meat market. That’s all I knew. I started in 1921 at 7 years old standing on a box behind the meat block cutting meat and had been working with my dad ever since.

Of course, by the 1940s, even earlier, we were aging our meat. In the early days before the 1930s they didn’t have the facilities, but in later years we aged everything for at least 10 days. Most of the meat you get today is not aged. When you age meat, it shrinks – loses weight – so the butcher is losing money. He starts out with 100 pounds and if he ages it, he’s only got 75, 80 pounds left.

Aging makes it tender. It’s a process of breaking down, deteriorating. Actually, aging is a process of rotting, but deterioration is a little nicer word. When you kill an animal, rigor mortis sets in. Every day the animal is dead it relaxes a little more. The relaxation of rigor mortis is what makes your meat tender. We were taught that when I went to butcher school.

By the time I went to school, during the ‘30s the meat was cut up and no longer sold in chunks. We didn’t have all the cuts they do today, but we had the main cuts. They’ve got a hundred different names for meat now. We never had those names years ago in the meat business.

I got out of business along around 1945. There were all these other markets coming in with parking and they killed us off. We were uptown and they had parking meters by then.

The small business is dead today. It’s all big supermarkets. The trouble with supermarkets is the profit goes back to Chicago or New York or overseas. It doesn’t stay in the community. Like my folks always said, carnivals come for four or five days and then they take all the money out of town.