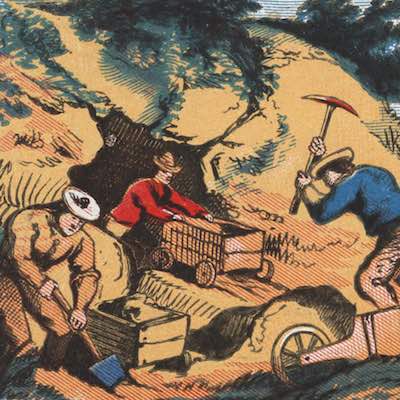 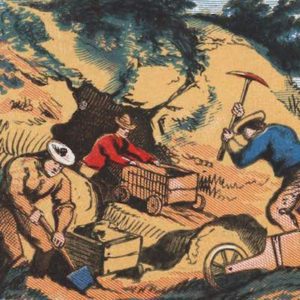 The discovery of gold in Colma in January 1848 set off one of the greatest gold rushes known to man. The 150th anniversary of the momentous discovery is being celebrated this year.

Today the discovery of the first gold is credited to James Marshall and the official date given for that discovery is Jan. 24.

But as local historian Bert Hughes knows, what is written and given as fact, isn’t necessarily so. Hughes should know because his great- great-grandfather, Peter Wimmer, was with Marshall when the gold was discovered. And it wasn’t Jan. 24, but Jan. 19.

Hughes’s great-great-grandfather’s story is so well authenticated that many historians give credence to Jan. 19 as the actual discovery date.

It is well known that James Marshall recommended to Gen. John Sutter the building of a sawmill and gristmill, and they entered into such an agreement. Marshall chose a site at Coloma where water and woods were abundant.

In 1846, Peter and Jennie Wimmer arrived in California as part of the Harlan and Young wagon train, the train that preceded the ill-fated Donner Party across the Salt Lake Desert. Lanford Hastings, who was leading the Harlon and Young train had an adobe out in the Montezuma Hills. That adobe, the first adobe in Solano County, is still there.

Peter Wimmer, Bert Hughes’ ancestor, went to Coloma as overseer with his second wife, Jennie, who worked as housekeeper for the party workers, which included Wimmer, Marshall and 10 Indians. On Jan. 19, 1848, Marshall and Wimmer were walking along the waterway when Marshall noticed something shinning on a rock. He picked it up and handed it to Wimmer.

Wimmer felt its weight and said, ‘‘It must be gold. I would take my pay in that metal.”

Jennie Wimmer had often said that the shinning specks they had often seen were gold. Her husband now believed she was right.

Marshall replied, “Well, Peter, we will give it to Jennie and let her boil it in her soap kettle all day and see if that will tarnish it.”

And this they did. The next morning Jennie Wimmer went to her kettle and poured out the soap into a though. There, in the bottom of the kettle, lay the nugget, polished bright by the action of the lye. She grabbed it, rushed to the cabin where the men were having breakfast and confidently placed the nugget down in front of her husband and Marshall.

“There is your nugget and it is pure gold,’’ she said.

Other nuggets were collected and in a few days Marshall took them down to be tested. Tests were made to ascertain the mineral was indeed gold.

When the men returned with the news, Jennie Wimmer loaded the table with every good thing to eat she could find in the camp.

Marshall handed her the original nugget and said, ‘‘Here, Jennie, this will make you a nice ring and it shall be yours.” From that day forth, the Wimmer’s took great pride in showing the first nugget of gold to be found in the state.

However, in later years, Jennie Wimmer traded that historic nugget to a man named Allen to write a history about her family. Allen had the nugget on exhibit at the Golden Gate International Expedition at Treasure Island. After he died, the nugget, known as the Wimmer Nugget, went to the Bancroft Library at the University of California, Berkeley.

Peter and Jennie Wimmer did apparently acquire more gold, but they did not become wealthy. They continued to live in the Coloma area on property they owned. They planted a peach orchard, which was still in operation up until a few years ago. Peter Wimmer was the postmaster at Coloma for a time and he helped build the local school.

Starting in 1860, the couple began what would be a series of moves.

First they came to Solano County and stayed possibly until 1862. From there they went to St. Helena and bought property. Later they took up farming in San Luis Obispo on land adjoining San Simeon.

It was here that Peter Wimmer founded a quicksilver mine. The couple then moved to Fountain Valley and later they went to Valley Center, San Diego County where Peter farmed his 160 acres. None of their homes were mansions by any means. They were all comfortable, two-story farmhouse style. The home in San Diego is still standing.

Elijah Silvey arrived in Solano County in about 1852, and saw a way to make money off of the multitude of gold miners seeking their fortunes in California’s wealthy gold fields.

Because Solano County’s stagecoach road was the highway to travel to the gold fields, Silvey decided this would be a good spot to build a way station for these thirsty, hungry and tried sojourners.

He built a simple structure, a way station – tavern, crude bedding and corral – in an area that is today the outskirts of Dixon.

To ensure that the steady flow of gold miners would seek out his hospitality, every night Elijah hung out a red lantern, which he hoisted high above the wild oats that grew in the area so that it could be seen from the distance. Silvey was very successful in attracting miners on their way and miners coming back.

That simple structure was in time to be refurbished, perhaps torn down and the area was to become the center of the village called Silveyville. Silvey was noted for his Christmas parties, which drew partygoers from around the county.

Many of the hardy souls who traveled by land and sea to pick up the ‘‘easy’’ gold in the California foothills, found the pickings were not so easy.

A number of these miners came from farming families and later were attracted to the Solano County’s rich soil and other attractions.

John F. Deming’s family’s homestead was at Glen Cove in Benicia. His father, Capt. Deming, was the pilot on a vessel that traveled between Benicia, Vallejo and San Francisco. John Deming went to the north fork of the American River to mine.

Joseph Enos arrived in California in 1860, worked in the mines for two years and then moved to Benicia where he raised a family on a 195 acres of land.

Benicia’s D.N. Hastings arrived in the San Francisco harbor in 1849. He worked in San Francisco for one month to earn enough money to go to the mines. Eventually he found his way to Benicia where he established a successful butcher business.

Suisun Valley’s J.H. Bauman came across the plains to the mines in 1849. In 1853, he returned to his native Ohio to purchase a herd of cattle, which he brought to the Suisun area.

Vacaville’s Edgar Ferguson Gillespie, who opened the first business in Vacaville, crossed the plains in 1849 with an ox team. He worked in the mines at Nevada City for about a year.

Like Gillespie, the Hon. R.C. Haile also came across the plains in 1849 and went to Nevada City. He owned 510 acres in Suisun.

W.K. Hoyt arrived via the Isthmus in 1852 and mined in El Dorado County. In 1859, he moved to Suisun and engaged in the butcher business.

Henry Hubbard arrived by ship in 1849. In pursued mining in Nevada City and Placer County. When he moved to Solano County, he was publisher of the Solano Press and became a justice of the peace and associate justice for the court in 1861.

William T. Kennedy was another 49er who arrived in May of that year via the Isthmus. For several years he engaged in mining and ‘‘drifted around.” In 1856, he arrived in Solano County. He operated a confectioner and fruit store at the corner of Main and California in Suisun City. Later he converted the store into a saloon, which he was the proprietor of by 1866.

John B. Lemon crossed the plains in 1849 and engaged in mining in El Dorado County for about two years. He also operated a general merchandise store at Kelsey’s Dry Diggings in 1849 and 1850, and then moved his operation to Coloma. In 1852, he crossed the plains again, this time returning with a herd of cattle for his ranch in Green Valley.

Christley Manka crossed the plains in 1849 and went to the mines at the Upper Yuba where he also worked in the general merchandising business. When he moved to the Suisun Valley, he established Manka’s Corner, a stage stop.

James L. Miles arrived in Hangtown in 1850 after traveling 100 days with an ox team from Nashville, Tenn. He mined for a time and then walked to Suisun Valley with $1.25 in his pocket, a blanket and his only clothes being those he was wearing. He became a potato farmer and in 1870 he owned 90 acres he had purchased from Lewis Pierce.